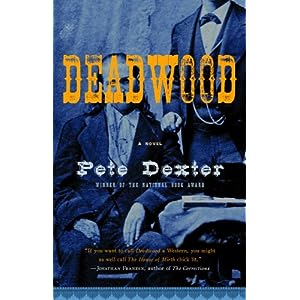 This is one crazy dirty book, but then that was what life was like in Deadwood, Dakota Territories, 1876. I picked this book up at the Adams Museum in Deadwood South Dakota, one of the nicest small town museum I have ever been to. The people of Deadwood are proud of their history, and the museum clerk recommended this book as a great view of post civil war life in Deadwood.

If you say that because you saw the cable series Deadwood (it was great) you know the story hence you don't want to read the book, please reconsider. The series was focused on the process of Deadwood becoming an organized city and had different story lines. On the other hand, if you want to meet the whore Lurline Monti Verdi and find out what is up with Charley Utter's "peeter", than this is the book for you.

All seriousness aside (ha!), this isn't the kind of book that would go over in my nice ladies book club. Matter of fact, I tried to share it with a male friend who likes to read Westerns with all the saloon girl antics and gun fights, and he didn't make it past the first few pages. On the other hand, I found it down to earth, funny and just crazy enough to read in my current demented state of mind. You are put into the situations with no pretense of literature. It was surprisingly well written.

And, now for a tasteless taste of Deadwood (the book), and may I say I'm having a heck of a time trying to find something that is not offensive to copy from this text.  You can't make people in the past politically correct, because it is the past? Right?

For context, Nuttall and Mann's Number 10 is a salon, and Bill has taken a liking to Pink Buford's bulldog. Matter of fact the two love each other.

"Charley found Bill back at Nuttall and Mann's Number 10, shooting glasses off the head of Pink Buford's bulldog. The bulldog was fearless. As soon as Bill set a shot glass between the animal's ears, the dog would put his tongue in his mouth so his head wouldn't jiggle, and set dead still while Bill drew one pistol or the other and shot it off. Bill was careful at first, aiming, but the dog proved steady, and by the time Charley came in looking for him, Bill was lining up a left-handed, over-the-shoulder shot in the mirror"

That image makes me smile!  But, be warned, the book is tragic.  Alas, lawlessness brings out the worst in many people.
Posted by Katherine at 11:51 PM