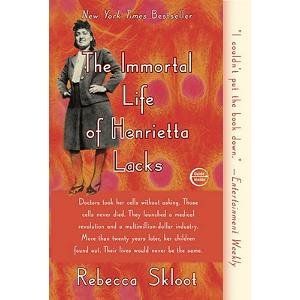 This is a worthy book to read, awesome to discuss, educational, enlightening, but not really exciting.  As a book club choice, it belongs with a group a pretty serious people who are excited to discuss the legal issues of genetic ownership, the history of human guinea pigs in the 1950's, black social issues and other serious issues regarding medicine, the law and social inequity.

Ho hum.  Give me sex and rock and roll (that is just my mood thing, not to discourage you on your path to understanding the world).

This book was written by a journalist, digging and finding golden information regarding the history of the magical HeLa cell.  Skloot was amazing in her search of not only the story of tissue used in research, but into the family history of Henrietta.  Her persistent digging into the story of Henrietta's cells as seen by the family members resulted in her meeting and befriending Henrietta's daughter Deborah. They develop a relationship that results in Skloot getting the real scoop.

Cells usually die.  They don't grow forever in a lab, but have an end life after a certain number of divisions. But, Henrietta Lacks had some cancer cells removed from her body in the 1950's that happened to not die because cancer cells don't do what healthy cells do (in this case divide a finite number of times).  These particular deviant cells grew and divided in clumps and mounds, were cultured and then shared by John Hopkins with other research labs.  Eventually, the HeLa cells (named using the first two letters of her first name followed by the first two letters of her last name) became a popular medical research medium, used in research such as the development of the polio vaccine and gene mapping.  They were used and still are used in medical research today.

This was a great book.  One of the book club members commented that she would like to see this required high school reading.  I think that is a good idea for certain classroom situations, but perhaps not to be mandated.

If you are interested in this subject, sure, read this book.  It is worthy of your interest.  If not, then pick up some nonfiction that perhaps is.  Personally, I find medical history books quite interesting.  Another one that I enjoyed was Virus X: Tracking the New Killer Plagues by Frank Ryan.  What an interesting discussion for the lay person about AIDS, Ebola, etc...