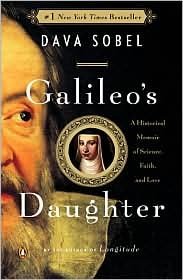 I can't speak highly enough about this novel! It was well researched, and a delight to read.  This book both educates and entertains.  You will learn not only about life in the late1500's and early 1600's in Florence and Rome, but also about the works of one of the greatest scientist the human race has known.  Galileo's life was during a plague (of rodent type)  ridden politically charged time of censorship within a religious based dictatorial government.  The political situations were thick; there were inquisitors, the 30 Years' War (major, like WWII, but confined to Europe), and Pope Urban VIII who cared more for power than the Catholic faith.  Pope Urban VIII was personally insulted by Galileo's writing (with the help of self serving political advisors) which sent him on the path to destroy this gem of science.

The title is misleading.  This book is about Galileo Galilei, not Sour (Sister) Maria Celeste, his illegitimate daughter that he placed in a convent at age thirteen.  The author takes you through Galileo's life, sprinkling letters received from his daughter in each chapter.  Throughout their lives they were in continual service to one another, be it through confections, medicines (Sour Maria was an apothecary), repaired clocks, new window frames, or encouragement through correspondence.

Other delights are the many pictures and the appendix showing a scientific timeline.  Not to be overly grim, but one of my favorite images was the sketch of the plague doctor.  They would strap on a beak, filled with flowers to ward off plague vapors.  Before reading this book, I thought they did this just to look special!

The Galilei genealogy was something I continued to refer to throughout the reading.  His family played a huge part in his life.  Galileo fell into the roll of the rich grandfather or uncle who continually had family members begging for money (including Sour Maria Celeste) or semi permanent lodging (due to war or life mismanagement).  He had a very generous caring nature, and never did he turn them away.

Is this a good book club selection? It depends on the book club.  Not every chapter is exciting, so there may be a bit of slogging through to be done.  If you have little interest in scientific experimental discovery, if you are not interested in Renaissance Italy and you perhaps have no interest in astronomy, then you are doomed to hate this book.  However, if the group has some foundations in science or history, then there is much to discuss.

History repeats itself, and I hear the parallel arguments between religion and science today.  In Galileo's time, the heresy was that the earth is not the center of the universe.  Today, religion and science are still in conflict, only the topic of discussion has changed to the big bang theory or the evolution of man.  The difference is that the pendulum has certainly swung in the interesting direction of science as a religion (which isn't very scientific either).  On the other hand, often the other side will not consider scientific evidence because they feel that it conflicts with their religious beliefs.  They both need Galileo's intersession, where there is room for God and science.
Posted by Katherine at 12:40 AM